25 Coffee Drinks to Try Before You Die, Part 2
How Breville Can Improve the Barista Express
The CSIRO and those 22,500 items
UAP questions asked in 2022 Australian Senate Estimates hearings
How the AeroPress Inverted Method was Born
Coffee

One of the most popular ways to use the Aeropress is via the “inverted” method. What is it? First, insert the AeroPress’ plunger into its brewing tube just enough so the rubber piston sits securely (about 1cm or slightly less […]

One of the most popular ways to use the Aeropress is via the “inverted” method. What is it?

First, insert the AeroPress’ plunger into its brewing tube just enough so the rubber piston sits securely (about 1cm or slightly less inside). Next, turn the entire contraption upside down. The filter holder is left off. With the brewing chamber open to you, add the ground coffee, pour in the heated water, and give it a couple of quick stirs to fully saturate the grounds.

With the coffee saturating and brewing, assemble the filter holder and filter, and screw into place. Put a cup on top of it all, upside down. Very carefully hold and flip everything over so the cup is now on the bottom. Wait some seconds, then plunge down on that brewed coffee.

That is how you brew with the inverted brewing method on an AeroPress! (We had a how-to guide on old CoffeeGeek, and I really should update it for this new website – coming soon, I promise!) This method is so popular, that even AeroPress themselves have embraced the method. It is important to note, the AeroPress inventor, Alan Adler, was never a fan.

It does not seem many people remember or even know how the Inverted Method was created for the AeroPress. Even AeroPress themselves don’t mention it in their long article on the method. I always thought the reasons and the way it happened were both very intriguing.

Second, the AeroPress got its first public demonstration at CoffeeFest in Seattle that fall. Below is CoffeeGeek’s September 2005 podcast about it, forward to 54.15 to hear one of the first ever mentions of the AeroPress.

The third thing was the Clover 1S Coffee Machine was debuted at a pop-up event at Victrola Coffee that same week.

The Clover’s unveiling was huge. Some coffee pundits at the time declared it a revolution in coffee brewing. Even Starbucks’ Howard Schultz was there, and said it was one of the best cups of coffee he ever had. The event was at night at a sort of indoor/outdoor popup a few blocks away from the Seattle Convention Center. I was there, along with a lot of other coffee nerds, sitting through a presentation on it. Afterwards, we got to taste the coffee it produced. 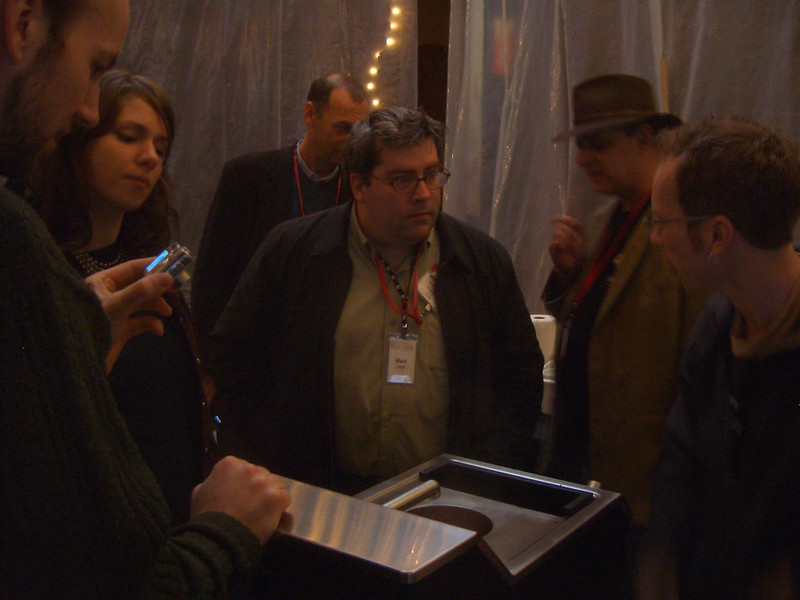 The Clover was ground breaking in many ways. Borrowing a bit from press pots and siphon coffee makers, it was designed to present a clean- and delicate-notes forward cup of coffee very quickly, in an “individual service” way.

The Clover had a brewing chamber, a hydraulic piston driving a very advanced filtration design, and a vacuum pump system to move brewed coffee. The idea was a full immersion brew done with a relatively fine grind; then all the grounds were separated from the coffee, lifted to the top of the machine to be swept off, as the brewed coffee was pumped through to a cup up front. It was also meant to be very fast – a cup in under 60 seconds. We talk about it in that podcast embedded above, at around the 56 minute mark.

I won’t get too lost in the weeds on the Clover here. Suffice to say it had a ton of promise, then Starbucks bought and ruined it. One thing’s clear: it was a phenomenon at the time and not like anything anyone had seen in recent memory in coffee preparation.

Except… we saw something on the CoffeeFest trade show floor that kinda, sorta, could have been like the Clover. It was the AeroPress. Only we didn’t know it at the time.

The AeroPress got its public introduction at the 2005 CoffeeFest trade show in Seattle. At that first showing, the brewer was positioned as a rapid, “espresso-like” coffee maker. Inventor inventor Alan Adler demonstrated it, and was doing side by side comparisons of the AeroPress’ brew versus actual espresso machine shot pulls.

The AeroPress is designed to work as a partial flow through device. For the first six months of its life, that’s how everyone used it. We got our prototypes of it in October 2005. By November, the AeroPress was being sold, albeit in very limited numbers.

During this time, I became absolutely obsessed with the Clover 1S and it’s possibilities (and it’s shortcomings). The full immersion brew, followed by the rapid separation of brewed coffee from the grounds, and the “single cup” modus of it all.

A few cafes in Vancouver were very early adopters of the Clover, and I visited them constantly to have brews from the machine as the baristas honed and revised the way they used it. One was Bump n Grind Cafe, and I probably had 10 Clover brews a week at that cafe for well over a year.

In the back of my mind, I couldn’t help think the AeroPress prototypes I had at home kind of, sort of, produced a brewed cup like the Clover did, except via pass through brewing (stalled when you put the plunger on top, to retard the flow of coffee). I even did some side by side tasting using the same grind (but lower doses – the doses used on the Clover were really high back then), and noticed some cup similarities.

I got the point where after adding coffee to the AeroPress, and quickly pouring in 205F water, I’d try to get the plunger sitting on top as soon as possible to change the brewer from a flow through brewer to an immersion brewer.

The next big public display for the AeroPress happened at the 2006 SCAA Trade Show in Charlotte, NC. Baratza gave Adler space in their booth, and I can tell you, the traffic to that booth to check out the AeroPress was pretty immense.

Adler even held a blind head to head taste test with the owner of Intelligentsia Coffee to compare the AeroPress’ output to an espresso machine, and it did favourably. Again, the inventor was pushing the brewing device as a manual espresso maker.

For many, this was the first opportunity to actually see an AeroPress, after reading about it almost exclusively in CoffeeGeek’s old forums for about four months.

CoffeeGeek’s Forums and the AeroPress Thread

In our old coffee forums, the longest and most posted-to thread by far was the AeroPress thread. That thread got its start in December of 2005 , and was still being posted to in 2020 (3,500 posts, over 12 million reads!)  when we transitioned to this new website.

There were many other threads about the AeroPress early on. There were discussions about metal filters, and alternative brewing methods, just to name two.

In the main thread, there were lots of lively discussions and debates regarding the brewing device. Adler himself was a regular contributor to the thread. At some point, I brought up the Clover comparison that had been percolating in my mind. I talked about how I developed a method for getting the piston on the brewer as fast as possible to create a vacuum, to keep the majority of the brewing water in contact with the grounds.

This had one detriment: you couldn’t use the AeroPress “stirrer” to fully mix the grounds with the brewing water. Similarly, the Clover method of that time was to do precise stirs of the coffee slurry to fully extract during its short brewing time, and we felt that was needed in the AeroPress as well, to ensure good extraction in a short brewing times of 60 to 90 seconds.

There was some talk about possibly hacking a filter holder for the Aeropress that could turn off and on the flow of coffee, to turn it into a full blown immersion brewer. As I recall, one engineer type CoffeeGeek member was working on that project in his home lab.

That’s when someone  – who I believe was forum member Rasqual, or Scott Marquardt* –  suggested just turning the entire contraption upside down with the plunger in place, extended, and try brewing with it that way. It was a revelation!

*unfortunately, those specific forum posts weren’t archived on Archive.org, so I’m going by memory and old word document notes, which mention Rasqual by username in my first notes on the inverted method.

There was a lot of discussion on this method, including the possible dangers (we’re talking nearly boiling water here). People were running TDS meters and such to see how inverted vs. normal brew worked. Others were trying preheating methods to get even better results.

At some point, Marquardt wrote up his practiced Inverted Method in 2007 and updated it in 2008.

I took part in the discussions, but my entire focus was on turning the AeroPress into a “Poor Man’s Clover”. (This did not make the actual Clover company owners very happy at the time). The intriguing idea of replicating the $11,000 Clover’s brewing methodology in a $30 device, including the steep times, stirs, water temperatures, percolated. It was a frequent discussion point on the CoffeeGeek Podcast.

In this episode from March, 2006, we reviewed the AeroPress in a Barista Roundtable, and then compared it to the Clover (from 2:54 through 10 minutes)

With the inverted brewing method developed and evolving, I obsessed on this goal to clone the Clover with an AeroPress. It was great time, having this little 200-225ml full immersion brewing chamber to play with. And boy, did I ever spend a lot of time experimenting in my little lab space I had set up in a spare bedroom in my condo.

After a lot of trial and error, I grew confident with the developed brewing method. That’s when I took the little AeroPress and this new Inverted Brew Method back to Bump n Grind. We organized a few head to head blind taste tests against their shop’s Clover 1S. (As a side note, the owners at the time were really good friends, and tolerant of my obsession with the AeroPress vs Clover thing).

We used the same coffee, same grind, the same water temperatures, but different steep times and coffee doses. The Bump n Grind Clover was operated on a 45 second brew time using 35g of coffee and about a 300ml output. I had tuned my own Inverted AeroPress method to 20g, using 225ml (every last mm of headspace in the AeroPress), and did a 60 second brew, including stir and flip times.

The results, according to the extensive notes I took at the time, were very evenly matched cups of coffee. Both presented, in good clarity, the more delicate notes the coffees offered. There was one difference though. The AeroPress cups had just a tad more body and depth. The Inverted AeroPress Method was indeed a poor man’s Clover, but actually improved on the overall cup quality.

Well, how about that.

Mark has certified as a Canadian, USA, and World Barista Championship Judge in both sensory and technical fields, as well as working as an instructor in coffee and espresso training. He started CoffeeGeek in 2001.